Anna Delaney is a recurring character in the first season of the BBC One and FX original drama Taboo. She is portrayed by the Swedish actress Noomi Rapace. [1]

Anna Delaney was a woman of Native American origins with a slender body, long black hair, and an oval face. Dressed in clothes adorned with lugubrious black feathers, and with her face painted with ashes and soot. Salish real personality is unknown, but according to those who knew her, she had a mental disorder that made her very dangerous for herself and those around her.

Anna Delaney was a Native American girl born as Salish, bought by British merchant and shipping mogul Horace Delaney along with a plot of land known as Nootka Sound in exchange for beads and other goods.

Anna Delaney, born as Salish, bought by Horace Delaney along with Nootka Sound plot of land in exchange for some beads. the purchase was put pen to paper on a document, known as Nootka Treaty. After contracting marriage, she gave birth to James Delaney, but was confined to the Bethlem Royal Hospital because of mental disorders, after having spent some time imprisoned in her own bedroom. [2]

Her alleged ghost briefly appeared at the East India Company parlor, standing behind John Pettifer during his meeting with James.[3] She also appears briefly during the interrogation just before James is tortured at the Tower of London. She can be seen above the guard on the left side of room.[4]

According to a statement from Brace, Salish tried to drown James a few days after birth. [5] 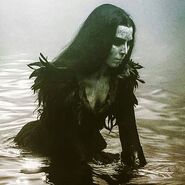 A vision of Salish