David Hayman
Brace was the faithful manservant of the Delaney family. Brace was a major recurring character in the first season of Taboo. He was portrayed by David Hayman.

"James Delaney's trusted manservant, and his father’s before him. Keeper of family secrets." [1]

Brace is an old man with a haggard appearance, unshaved and with a battered left knee, never completely healed after he broke it playing with James many years before. Brace is a shrewd and cautious man, and it is possible to rely on him to keep even the goriest secrets.

Brace is the faithful servant of Delaney's family, guardian of important as disturbing secrets. For years he has been faithfully serving Horace Delaney during the period of his folly, as well as a gaming companion for James Delaney when he was a child. During one of these games, Brace broke his knee and since then has remained a bit crippled.

Brace attacked James Delaney in the middle of the night brandishing a cane, having mistaken him for a thief. Once recognised his old master, the two embraced fondly and began to remember the past in front of the fireplace, drinking liquor. In the following days, Brace helped James to make ends meet, updating him on what happened during the years when James was absent from London.[2]

James' actions continued to leave Brace appalled, so much that he expressed concern over the enemies that sooner or later denounce him for his immoral crimes and he would be executed.[3]

Brace continued to be concerned about the plans of James, not at all pleased to be totally unaware. He was especially annoyed by having to comply with Lorna Bow's orders.[4]

Despite all of this, he continued to follow James' orders, escorting Lorna Bow returning from prison and advising his master about some details of London society, such as the reputation of Countess Musgrove, who had recently invited James to a party hosted at her palace.[5]

Brace insisted on putting some common sense James' head, but to no avail. The servant also held off the insistent questions of Lorna Bow, diverting her with wrong answers as suggested by James.[6]

Brace, cornered by James at a time of strong emotional stress of the latter, revealed to young Delaney unpleasant details about his mother's insanity, as her attempts to drown James in the lake when he was a newborn. James threatened Brace to say no more, and the servant obeyed. Later, Brace had a brief conversation with Lorna Bow, informing her of the discussion he had with James, summarising it as "family matters".[7]

The Burden of Guilt

Brace was cleaning the dishes in the kitchen until his hands bleed, heartbroken over the arrest of James Delaney, fearing for his life. In the guise of guilt, Brace revealed to Lorna that he was the murderer of Horace Delaney.[8]

Relieved by James' release from the prison, Brace tried to contribute as much as he could to their escape until James informed him he did not want Brace aboard the Good Hope with them, since Brace did not know how life was out of service, and that his place was in London. Named heir to Chamber House, Brace stayed at home, ruefully welcoming George Chichester when he came to collect the documents James Delaney left for him, containing evidence to accuse the East India Company of the Cornwallis's shipwreck.[9]

"This Nootka Sound is a curse. It will bring the King and Empire down upon your head."
― Brace expressing concern to James

'"Sir, I have seen nae deerskin treaty, nor have I seen fairies or water sprites. But what I do have are Malay coins, enough to bury you. Prayer beads, not enough to get you to heaven. And hashish, enough to ease my grieving when the East India Company slit your throat, which, of course, they will."
― Brace in a conversation with James. 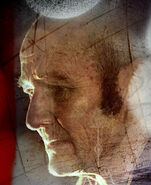