"Dr Edgar Dumbarton is an American physician working at St Bartholomew's Hospital London: a precarious position to be in now that the two countries are at war." [1]

Dumbarton was a doctor who had infiltrated the dense network of spies who played the fate of the British Empire and the Americas. A middle-aged man, balding and with a pair of round glasses with a metal frame. His clothes were always stained with blood and dye for fabric.

Dumbarton was a surgeon and merchant who, from the Americas, arrived in England for his trades. Once in London, he settled at St Bartholomew's Hospital to carry out his clandestine activities on behalf of the United States of America, coming into contact with the East India Company.

Dumbarton was in the course of his medical tasks when James Delaney came in the cold and smelly rooms of the bone fractures department at St Bartholomew's Hospital, going right to the point of the speech, or talking on the American espionage. Dr Dumbarton, on the defensive, drove out badly James Delaney. [2]

After their first unpleasant encounter, Dumbarton let one of his spies following Delaney, and it was in this way that he discovered the attack of a Malay to Delaney in a dark alley. Sewing up the wounds of Delaney without resorting to anaesthesia, Dumbarton questioned the former cadet about what he knew about American espionage, and Delaney asked again to have a meeting with leading names such as Carlsbad, to have a total monopoly on the tea trade in exchange for Nootka Sound, and implicit betrayal of the Crown and the East India Company. Dumbarton gave him to understand that he would organize something. [3]

During a party hosted at Countess Musgrove's mansion, Dumbarton approached James Delaney, confirming the opportunity to fulfil the request, including both tea trade and meeting with "Carlsbad," accompanying this news with a slightly veiled threat. [4]

Dumbarton urged James Delaney to reduce the processing times of the chemical compounds to produce gunpowder, suggesting to use the French method which required the use of chlorate. [5]

Dumbarton took part in the delivery of gunpowder in the middle of the night, assuring James that he would report to Mr Madison on such a positive outcome of the negotiation. In this statement, the doctor was threatened by James Delaney about a possible betrayal by them, even so, Delaney decided to keep the gunpowder on the ship betraying the Americans, and it turns out that the idea of clearing the way for delivery of American ships was a strategy to deceive the mercantilist tariffs of the President of the United States. [6]

Warned by an associate about the arrest of a merchant arrested on charges of treason and former unfriendly alliance with Americans — James Delaney — Dumbarton replied the boy with a cryptic message, referring both to the colours of the American flag as to the British one. A clue to his double game. [7]

Once James was released from prison he visited Dumbarton, who was busy in his illegal business in the secret basement of St. Bartholomew's Hospital. Here the doctor offered to give him medicine to reduce pain, composed of laudanum and burdock. The conversation veered immediately about their illegal business, and James rushed at Dumbarton exposing him as a double agent; Dumbarton, in fact, worked both for Americans and the East India Company, justifying his actions with the belief that no one is a servant to one master.

To unmask Dumbarton's coverage was the inconsistency of the pacts made by James with Dumbarton and those with Countess Musgrove, pointing out that she was just a pawn in Dumbarton's hands and not vice versa. Dumbarton was thus exposed in a desperate attempt to survive, trying to unravel the tangle of deceit and subterfuge by himself implemented, metaphorically likened by James to a wolf in sheep's clothing.

Fainted following a violent blow to the head inflicted on him by James, Dumbarton was drugged with his own laudanum and drowned in a vat of dye. His corpse was then tied by ropes to the same scaffolding used to dry the flags. Pinned to his chest, the false treaty that would have stuck Delaney left as a warning to East India Company's members. [8]

"You have no God, certainly no country. What do you have?"
— Dumbarton to James Delaney

"No-one in this city has only one master."
— Dumbarton to James Delaney

"When my reds are red and my whites are white and my blues are blue, then I will clear out."
— Dumbarton revealing his "true colours". 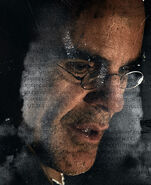