"George Chichester is a member of The Sons of Africa. Working selflessly and tirelessly alongside abolitionist groups, in the pursuit of justice." [1]

George Chichester is a middle-aged man of African descent. Dressed smartly, he wears a pair of glasses with a metal frame on the tip of his nose. Chichester is an idealist who tries to fight injustice in all its forms, without thinking about the social status of the perpetrators of such wrongdoings.

For nine years since 1805, on an annual basis every July 10th, Chichester wrote to the office of Solomon Coop, demanding that justice was done about the sinking of The Influence. Looking for Sir Stuart Strange's Achilles heel, Mr Coop finally decided to receive Chichester, who introduced himself as spokesman of the Sons of Africa, reporting to the Secretary of the Empire that the East India Company was responsible for the sinking and illegal trafficking of slaves. [2]

Having recounted Mr. Benjamin Wilton and John Pettifer of his travels in Egypt, Chichester informed both men about his investigations on the wreck of the ship known as The Influence, and how he had discovered that this ship was secretly and illegally used to transport a cargo of slaves. His investigations were supported by a document signed by the Prince Regent himself as Chichester took care to show to the two executives of the East India Company's Desk. [3]

Late at night, George Chichester visited Chamber House to meet James Delaney, who received him in his usual gruff manner. Chichester, refusing alcohol offered by the host, introduced from the beginning his intentions regarding the Royal Commission that was investigating the Cornwallis ship, then known as "The Influence" in the port of Cabinda. Chichester showed one of the nails used to nail the cargo hold to James, who immediately recognized the object, saying he was willing to intercede for him if James had helped him to trap Sir Stuart Strange, causing him to be accused of illegal trafficking of slaves. Chichester asked James to write a report about the orders he received from Sir Stuart, so that much of the blame falls back on the East India Company, making justice for the victims of the shipwreck. Afterwards, Chichester went to the Molly house, where he was able to notice the eccentric furnishings included an erotic book before meeting with James Delaney and Michael Godfrey, who was supposed to provide for a written record of the orders given by Sir Stuart after he raised his hand, a sign for the clerk not to put in writing that conversation. The men took their leave with a promise to ally themselves against the East India Company. [4]

A few days later Chichester showed the presence of Sir Stuart while he was playing golf and exchanged Chichester for a caddy because of his skin colour. Chichester briefed him about his status as a free man, also informing him of having by his witnesses ready to testify against him. The arrest of James Delaney irritated greatly Chichester, who appeared angry at Sir Stuart's office, informing him to be still willing to pursue his investigations to reveal the illicit and illegal trade of the East India Company. After Delaney sailed with his cronies, Chichester paid a visit at Chamber House where he met Brace, who directed him to the attic where Chichester found documents and reports signed by Godfrey and James himself, essential evidence of culpability of the East India Company in the Cornwallis' sinking and the illegal trade of slaves. [5]

George Chichester: "July 10th is the anniversary of the sinking of the sloop The Influence. Not the ship's real name, of course. Its name was changed and papers altered when it took on human cargo in the port of Cabinda. 280 souls. 120 men, 84 women. And, sir 76 children. All lost. Drowned."
Solomon Coop: "And what is your interest in the sinking? Did you have relatives aboard?"
George Chichester: "Mr Coop, even though I am black, I am not related by blood to every slave stolen from Africa."
― conversation about Chichester's goals

"I write on behalf of humanity. As a man concerned with injustice."
― George Chichester to Mr Coop

"You can mystify it all you want, but in the end, that is what it is. A cat in the middle of the desert, with no nose. But what an extraordinary achievement, gentlemen. When you think that the pyramids and the Great Valley of the Kings and the Sphinx were all manufactured by men with skin almost as dark as my own. It almost defies all your... Our current views of nature."
― George Chichester to Wilton and Pettifer

Benjamin Wilton: "You are very well-travelled, sir."
Chichester: "I just wish I had seen those wonders without the benefit of chains around my arms and legs."
— Chichester on slavery

"I am scornful of those who judge. I myself, am only concerned with men's minds. Clothes are of no interest to me. We can talk with purpose or without purpose."
— Chichester to Godfrey 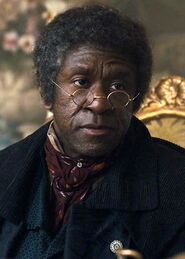