"George Cholmondeley is a chemist and somewhat maverick scientist, with a taste for excess. Opportunist, social deviant and socialite party regular." [1]

George Cholmondeley is an irreverent chemist with a passion for beautiful women and a remarkable literary culture. Expert in his discipline, Cholmondeley is ingenious and creative without being reckless in creating explosives and bombs of considerable importance. George Cholmondeley is a reliable and loyal man, as repeatedly demonstrated with James, but mostly by his friendship with young Robert. He is a man in his thirties, with short brown hair, green eyes, and a well-proportioned body.

George Cholmondeley was a chemist who organised frauds and scams to extort money during demonstrations in which he acted out scientific experiments. His knowledge and skills in the field of chemistry attracted the attention of James Delaney.

During a demonstration in a darkened room, George Cholmondeley gave proof of dexterity in handling chemical elements to produce explosions for recreational purposes. Once the show ended, Cholmondeley was interrupted during sexual intercourse with one of the female spectators by James Delaney. His attention was immediately drawn to a bag of gold coins thrown on the table by Delaney. In the following days, early in the morning, the chemist was led by Delaney in a desolate country farmhouse, his new factory. Here the two had a conversation about how to implement George Cholmondeley's chemical skills available to James Delaney. [2]

George Cholmondeley continued to work on behalf of Delaney, mixing the chemicals stolen from the stocks of the East India Company, including the saltpetre. Unable to cover the entire work process all by himself, the chemist requested an assistant and James Delaney brought him his half-brother, secretly raised in the countryside by Ibbotson. Cholmondeley confessed to James to be interested in Lorna Bow, meeting the disappointment of his employer. When James Delaney was cornered by Dumbarton about processing times, Cholmondeley expressed his opposition to resort to dangerous means to hasten the work, since it was very likely triggering an explosion by using chlorate. Furthermore, Cholmondeley expressed his belief about the birth of Robert, saying that he was convinced that he was James' son.[3]

Cholmondeley instructed Delaney's men on the preparation of gunpowder, taking part in the supervision of the process secretly brought forward at the secluded country farmhouse. Prepared part of the cargo to be delivered to the Americans, Cholmondeley accompanied the men during the transportation of gunpowder, ingeniously hidden in some coffins in a hearse marked as containing corpses killed by cholera. Unfortunately, when Ibbotson's confession to the priest came to the ears of the East India Company, Cholmondeley had to transport the remaining explosives on board of small boats, ensuring that it didn't jump in the air midway while fleeing from soldiers. [4]

When James Delaney was arrested by King's guards and taken to the Tower of London to be tortured under Solomon Coop's instructions, Cholmondeley burned several papers before fleeing from his lodgings. [5]

Cholmondeley was reached in his hiding by Robert with a letter from James in which he explained the plan to be implemented. The chemist had spent the night with some prostitutes and was dozing on the floor when the child burst into the room. Deciding to continue working for James, Cholmondeley made sure to prepare enough explosives for a decisive battle with their enemies. During the clash with the soldiers at the dock, Cholmondeley caused several explosions through ingenious remotely activated systems and throwing several grenades directly at the soldiers who were running against them. During the fight, the chemist was severely burned as a result of an explosion and was rescued by James and Atticus. However, when a new threat in the form of a few King's guards approached the two rescuers, both James and Atticus dropped the unconscious George in the mud in order to hide from incoming fire. French Bill then arrived, using the chemist as a meat-shield, which luckily was not shot, before carrying him on board when the threat was temporarily dealt with. As they fled towards the open sea, Cholmondeley was lying on a gurney below deck, muttering apologies to a certain "Maria", as he was being comforted by Michael Godfrey.[6]

"You know, semen not ejaculated at the point of passion turns to poison and narrows the mind. Eventually, you become an ape."
― Cholmondeley to Delaney

"Almost as good as the batshit distillations of Burma."
― Cholmondeley to Delaney

"All these chemicals I ingest chase lines of Shakespeare out of me sometimes unbidden."
― Cholmondeley

"Gentlemen, I want you to pay attention because all our lives will depend upon it. This harmless-looking powder is called chlorate. And on its own, it is harmless. But when it is added to the sulphur and charcoal in our vats, it is anything but. Think of it as like adding a baby to a marriage. All were ordered and calm and now there is this thing that demands attention. Stops you sleeping, belches, farts, screams and she's going to make this whole process louder and wilder, more insane, more impractical and the only thing that will stop this entire enterprise from erupting in a giant explosion the size of Mauritius is this and dedication. Because, from now on, until the powder is complete, we have to stir. Continuously!"
― Cholmondeley 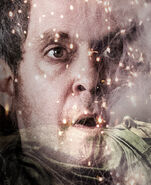