Helga von Hinten was the madam of a brothel on the docks of London. Helga was a recurring character in the first season of Taboo. She was portrayed by Franka Potente.

"A madam of German descent, she operates a brothel down by the docks, and is happy to use bribery, intimidation, and violence in order to protect her girls and her business." [1]

Helga was a woman whose body and spirit was hardened by street life. Madam of a brothel, she was no stranger to profanity or sexual promiscuity of all sorts.

Helga had long strawberry blonde hair, and a face with angular features accentuated by excessive makeup, especially the bright green eyeshadow skirting her eyes. She had a nasal septum piercing and some gold teeth.

Helga von Hinten is a business-minded madam who shares a history with James Delaney. Helga took possession of some Delaney's warehouses near the docks during James's period of absence from England and Horace Delaney's illness, in order to use them for her prostitution business. A dozen years before James' return to London, she gave birth to Winter.

Helga appeared behind James Delaney when he was trying to open one of the warehouses near the docks, ignoring that in the meantime the abandoned warehouse had been used by Helga as a brothel. The woman was not very happy to discover that the rightful owner of the warehouse had returned, but nonetheless offered to Delaney the services of her prostitutes - both boys and girls. However, when James Delaney's short temper came out, Helga offered to give him half the profits of the brothel as long as they could continue using the warehouse to receive customers. As the man left the building, Helga shouted at him that she had heard disturbing stories about him. [2]

In the middle of a sexual intercourse with an elderly client, Helga was interrupted by James Delaney who entered the brothel room. Relieved not having to satisfy any longer the elderly man, Helga tried to deflect James's questions trying to seduce him, but had to turn her attention from Delaney when he proved to be aware of the true identity of Winter; namely Helga's daughter. [3]

Paid in advance by James, Helga made her prostitutes available to Delaney's men. When the prostitutes distracted the East India Company's guards, Helga stifled one of them without hesitation while Atticus, French Bill and few others robbed the warehouse. [4]

Helga hastened to inform James about the costs to repair windows and doors smashed by soldiers in search of stolen goods. James, in turn, informed the woman and her prostitutes about the legal loopholes that would protect them against the soldiers, offering them money and a rough diamond in order to keep their mouths shut about the robbery. [5]

Helga was lying on her bed intoxicated by opium when a prostitute came to inform her that James Delaney was at the tavern. After she went downstairs to receive the guest, the two had a bitter argument when Helga refused to kill the captain of a ship to help James to get a new ship after his last one was destroyed in an explosion caused by the East India Company. [6]

Distraught by the death of her daughter, Helga attended the funeral on the beach, having done so even write up a moving eulogy read by the pastor during the funeral mass. Helga was then accompanied by Atticus on board a small boat to toss Winter's corpse in the bottom of the river so that it was transported to the ocean. Later, when James was on the way to the tavern, Helga fired at him to keep him away, accusing James of the murder of her child. Helga, animated by feelings of revenge, appeared before the East India Company Desk along with Pearl to accuse James Delaney of the theft of gunpowder from the Company warehouses. Unfortunately for her, the two women were arrested according to Sir Stuart Strange's orders to ensure not to lose the security of their testimony during the trial of James Delaney. [7]

Under the supervision of John Pettifer, the two women were carried in a carriage to be released during a false ambush subject of an agreement between James and Sir Strange, but Atticus killed Pettifer in freeing the two women. Once safe with Delaney's men, Helga spoke with Lorna Bow and little Temple, who confessed that he had seen the murder of Winter at the hands of an agent of the East India Company. Once again teamed up with James and ready to sail with him, Helga waited with the other women and Michael Godfrey inside the Dolphin Inn until the clash broke out against Coop's men. Fleeing to the ship while the men were fighting, Helga turned back to retrieve her gun fallen to the ground during the escape and was killed by a flying bullet, falling lifelessly to the ground while the others fled.[8]

"You! I remember you... I've heard the stories. If I give you a girl I'll never see her again!"
― Helga to James Delaney

The German last name von Hinten translates to 'from behind' 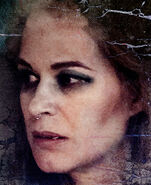