This article is a stub. You can help Taboo Wiki by expanding it.

Horace Delaney was a minor character mentioned in the first season of the BBC One and FX original drama, Taboo. He was portrayed by Edward Fox.

"Horace Delaney was the father to James and Zilpha and is said to have gone mad before he died, leaving his estate and the mysterious Nootka Sound to his son. [1] He was an adventurer, merchant and shipping mogul." [2]

Horace Delaney was described by everyone as a man driven to insanity, speaking to his son who was presumed dead at the foreshore. However, Brace, his entrusted steward, claimed that the he was a kind man.

Horace Delaney was buried in the cemetery of his parish with Zilpha and Thorne Geary dealing with the funeral payment, refusing to pay an extra amount to deter grave robbers. James returned to London from Africa to attend the funeral of his father, but before he shows up at the church, he visited the mortuary, stealing the coins lying on the eyes of the corpse as a payment for the caretaker. James later put the coins in the offertory during the funeral service. [3] James Delaney went to visit a coroner to investigate his father's death, and threatened ro kill him if grave robbers would disturb Horace's final rest.[4]

During a conversation between James and Brace, it was revealed that Horace Delaney was poisoned by his manservant. [5] 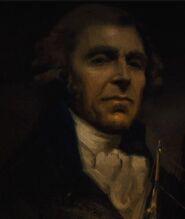