This article is a stub. You can help Taboo Wiki by expanding it.

Martinez was a minor character featured in the first season of Taboo. He was portrayed by Danny Ligairi.

Martinez was a man of Polynesian origins with black curly hair shaved on the sides, tribal tattoos scattered all over his sturdy build, and an intimidating expression.

Martinez was one of the associates of James Delaney from the Dolphin Inn, as well as the brother-in-law of Atticus.

"You see the heathen? He's my brother-in-law. He says the best bit of a man to eat is this. It's tender.
— Atticus introducing Martinez 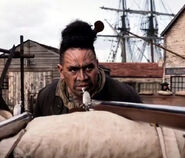 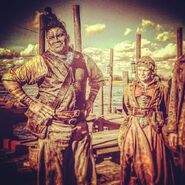