Edward Hogg
Michael Godfrey, nicknamed Godders, is a clerk and double agent working for James Delaney. Godfrey is a major character in the first season of Taboo. Godfrey is portrayed by Edward Hogg.

"Honourable East India Company clerk for the last twelve years. Godders has witnessed all words exchanged at formal Company meetings, recording everything but those words spoken under a raised hand."[1]

Michael Godfrey is a sensitive and shy young person with a calm voice that betrays a certain fear of the world around them. Godfrey is a young lanky person with a milky white complexion, green eyes, high cheek bones and wavy dark brunette hair almost black. Since in the British Empire it was illegal to freely express their gender identity and sexuality, Godfrey hides their identity and daring to wear women's clothes only in the seedy molly house until they ran away with James Delaney and his "gang of the damned," presenting themselves as a woman.

As a clerk, Godfrey attended the meeting at the headquarters of the East India Company in London when attorney Robert Thoyt put the order aware of the return of James Delaney. Later, when the latter was invited by the Society for an informal meeting to a discussion about Delaney's legacy, Godfrey and Delaney exchanged a fleeting glance. [2]

During one of the meetings, Godfrey was invited by Sir Stuart Strange to read, as part of his reprimanding, the items on the agenda to remind members of the Company of the reasons why they were gathered.[3]

Dressed in women's clothes, Godders witnessed a pantomime at the Molly house, where they rejected the attention of a couple of customers claiming to be already reserved. Shortly after they refused yet another customer, Godders saw James Delaney on the threshold. Terrified, they sought refuge in one of the adjoining bedroom where a rich man was being spanked by a prostitute. James followed Godders just in time to lure the young clerk in a more secluded spot. The two fleetingly remembered their past friendship at the seminary, when Godders was secretly in love with him. Unfazed by this, James offered Godders a pound a week if they report to him all the plans of East India Company. Godders was hesitant, afraid of what might have happened if in case they were to be discovered, but Delaney was able to persuade them. [4]

Godfrey was visited by James in search of information, and the young clerk adjourned Delaney about the trafficking of gunpowder. Holding hands, Godfrey expressed concern about what the Crown and the East India Company would do to those around James, in retaliation. James dismissed Godfrey's concerns, insulting them. [5]

Godfrey was at their desk during the extraordinary meeting of the East India Company's Desk, but Sir Strange motioned to not write down what was said during the meeting. [6]

Having discovered that James had been betrayed by one of his, Godfrey rushed to Delaney Mansion to inform their friend, but James told Godders to go home so they were not seen together. Following the destruction of James' ship, James became enraged with Godfrey because of such a move of the Company, even pointing a knife at their throat at the brothel, leaving the clerk scared before going away furiously. [7]

Godfrey was present when Helga von Hinten and Pearl testified against James Delaney before the East India Company Desk, and as soon as they had the chance, Godfrey rushed to Delaney's house to warn James about what had happened. Godfrey was convinced by James to help him with George Chichester, pretending to be prepared to testify to the detriment of Sir Stuart Strange for the Royal Commission led by Chichester who was investigating the sinking of a slave ship. Urged to collect their belongings and go to Atticus whilst James was trying to unravel the latest tasks necessary before sailing for America, Godfrey, wrapped in a long cloak and wearing women's clothes, left London aboard a small boat along with Martinez. [8]

After being carried to safety by Martinez at the Dolphin Inn, where they remained under the care of Atticus, Godfrey waited with the rest of the group that James was released from imprisonment. If this was not the case, to hand over incriminating documents about Sir Strange to Mr Chichester so they could be used for the investigation of the Royal Commission. During the fight with the King's guards, Godfrey ran toward the ship with Lorna Bow, Helga, Pearl and other vulnerable members of the crew. Later, once set sail towards the open sea, Godfrey comforted George Cholmondeley, severely burned after an explosion during combat. [9]

Godders: You know, at the seminary, I was in love with you. Of course, you do.
James Delaney: And there was I thinking that we were just brothers in arms. Didn’t we share a bed sometimes in the great hall?
Godders: It was torture. Exquisite.
― Remembering old school time 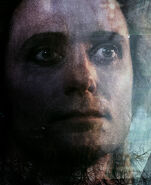