Pearl is a prostitute who worked for Helga von Hinten. Pearl is a a recurring character in the first season of Taboo. She is portrayed by actress Tallulah Rose Haddon.

Pearl is a young woman in her twenties, with a pale complexion accentuated by makeup and malnutrition. Her face is like that of a porcelain doll, surrounded by a tangle of dark blond curls. Her blue eyes are constantly on the alert to catch every detail to report to her mistress. Pearl is not as smart as Winter, but she is equally hardened by street life.

Pearl is one of the prostitutes who worked at the brothel run by Helga von Hinten.

Pearl tried to seduce James at the funeral reception in honour of Horace Delaney, but the man showed no interest in her.His attention, in fact, was directed towards his half-sister and her husband. Later, Pearl was lying with other prostitutes in the brothel when James Delaney came to claim ownership of the warehouse near the docks. There, Pearl witnessed the altercation Delaney had with Helga about the rent and the use of warehouses for her illegal activities. [1]

Later, she was noticed by James when the visited the inn run by Helga. On this occasion, James was able to peek under her skirts, and instructed the madame in order for Pearl to be at his men's disposal. Pearl was then hired to distract the guards of the East India Company's warehouse with the promise of a sexual encounter, while Atticus and his men robbed the warehouse of gunpowder. [2]

Because of this involvement, prostitutes became the target of the soldiers who were investigating the theft of gunpowder from the East India Company's warehouses. It was during one of these “investigations” that Pearl found her life at risk at the hands of a soldier attempting to rape her, but Pearl was saved by the timely rescue of Winter and French Bill. The latter, in fact, beat to death the soldier. [3]

Following the violent explosion occurred at the harbour that caused huge losses to Delaney Nootka Trading Company, Pearl informed Helga about the arrival of James Delaney at the inn, referring to the man as “the devil.”[4]

Forced by her mistress to testify against James Delaney before the East India Company Desk, Pearl was arrested along with her mistress in order to secure their presence in court during the upcoming trial.[5]

Seized and watched by John Pettifer's men under the direct order of Sir Stuart Strange, Pearl and Helga were saved by Atticus and his men and taken to secure at the Dolphin Inn. There, they waited to set sail away from England. Once the clash between the Delaney's associates and Crown's soldiers broke out, Pearl ran toward the ship along with the other rebels. During the escape, Pearl witnessed the death of her mistress, gunned down by a shot. Once set sail, Pearl bandaged the wounds of Lorna Bow. [6]

"The Devil is here."
— to Helga about James Delaney. 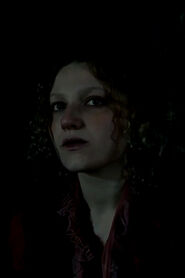 Add a photo to this gallery

Retrieved from "https://taboo.fandom.com/wiki/Pearl?oldid=5837"
Community content is available under CC-BY-SA unless otherwise noted.