Mark Gatiss
Prince George [1] is the heir of King George III, currently serving as Prince Regent. The Prince Regent is a recurring character in Taboo. He is portrayed by Mark Gatiss.

"Wildly unpopular due to his obsessive self‐interest, parties, and debauchery. The Prince Regent has been made acting Head of State after his father King George III was deemed unfit to rule." [2]

Prince George is the conceited head of the British Crown. Behind a façade of unintelligent and lazy superficiality, the Prince Regent is cultured and skilled enough to comes up with a great variety of political plans despite the fact that his country is a parliamentary monarchy. The Prince Regent shows no interest beyond that to satisfy his slightest whim, to the point of disregarding some laws of the British Constitution to have more power in the government of the British Empire. He shows some hereditary symptoms of the same disease that devastates his father, leading him to self-centeredness and increasing his sense of humour.

Although he is not corrupt in a voluntary sense, the Prince Regent is easily manipulated by his Secretary, Solomon Coop in the face of any corruption index, despite having a rather weak antagonistic role when compared to other prominent figures such as Sir Stuart Strange. This often leads Prince George to clash with his secretary, who seeks to mitigate the Prince's personality with the Empire needs — but it turns out that Coop is a corrupt man who commits acts against British laws through the Prince. Prince George, in fact, is an accomplice of several illegal activities impelled by the State.

Prince George is an overweight man with a round face and a double chin. He has ringlet brown hair and hazel eyes. The Prince is dressed elegantly and richly, as befits the highest exponent of the noble class.

Born George Augustus Frederick to King George III and Queen Charlotte, Prince George is the eldest son and heir to the throne of the United Kingdom of Great Britain and Ireland. His regency started during his father's final stage of mental illness that made him unfit to rule, hence the title of "Prince Regent". Prince George is in direct conflict with the Americas and harbours a mutual distrust of the East India Company.

Weakened by an infection in his toe, His Majesty was bored by Solomon Coop, his secretary, about the maritime trade involving the major nations, when the Prince Regent just wanted to talk about his supposed precognitive dreams. In conversation with Coop, the Prince expressed his contempt for the East India Company. [3]

In the middle of his usual pastime, Prince Regent was informed by Solomon Coop about James Delaney and the question of Nootka Sound, suggesting to a listless prince to solve the problem with the East India Company to avoid further problems with their policy toward Americans. [4]

Angry about the theft of his gunpowder stocks, the Prince Regent was about to unleash retaliation against the keepers of the warehouses but was distracted by such thoughts by his secretary. Solomon Coop, in fact, advised him to investigate the East India Company - responsible for safeguarding the gunpowder - and in particular on Sir Strange. Prince Regent agreed, signing a free way to George Chichester, alarming Sir Strange. [5]

Having put forward the arrest warrant for James Delaney as an enemy of the Crown, the Prince Regent commissioned Solomon Coop to preside at the interrogation, without hesitation in using unspeakable torture to extract from James' mouth the names of his allies conspirators against the Crown. Comfortable lounging in one of his sumptuous lounges, Prince Regent waited of getting information while wasting time playing with a globe. When James Delaney proved a tough nut to crack, Prince Regente agreed to meet his claim to meet Sir Stuart Strange in a cell, instructing Solomon Coop to manage the whole thing. [6]

The Prince Regent charged his secretary to drive a heavy illegal offensive against James Delaney and his men. He was furious at not having been able to foil the conspiracy against the British Empire by the Americans, nor having denounce those who had caused offence to his royal name. Manipulated again by his secretary to remove evidence of Coop's crimes, and ignoring the involvement of the East India Company, the Prince Regent ordered a lawsuit for Delaney's execution. His secretary conducted a mass murder, instead. [7]

"Tell the Admiralty, although the gossips say that all Prinny wants is flowers and waltzes, in truth, Prinny also demands the American ships be sunk, the survivors hanged, the bodies of the drowned nailed to the church walls of Ireland to stop their rebels making common cause."
― Prince Regent demanding orders.

Prince Regent: "Conversations between monarchs and God are private, but I will give you the gist of it. Due to this monumental balls-up, everyone must hang. East India, Americans, Irish, French. Dogs, cats, rabbits... Why not? Priests, clerks, fitters..."
Solomon Coop: "There is little doubt in my mind that senior directors at the East India have done a deal with Delaney."
Prince Regent: "Just fucking kill him!"
Solomon Coop: "If he dies, then Nootka goes to the Americans, as per his will."
Prince Regent: "Fuck Nootka! Fuck wills! Fuck treaties! I'm the head of fucking State! And by the command of His Majesty kill him." 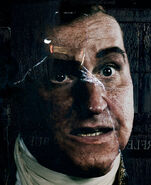