Leader of the East India Company

Jonathan Pryce
Sir Stuart Strange was a major character in the first season of the BBC and FX original drama, Taboo. He was portrayed by Jonathan Pryce.

Sir Stuart Strange was a man in his sixties with white hair, grim eyes, and the face marked by the years. He was wearing fine black suits, elaborately stitched with gold embroidery and ascots pinned with precious brooches. An ostentatious richness of clothing that, however, poorly concealed his cold personality. Sir Stuart displayed a bad temper, often by swearing and screaming against his subjects, such as Benjamin Wilton when his subtle and seemingly calm approach didn't achieve the desired goals. He was a ruthless Military General, who employed morally questionable methods. Former cadet James Delaney described him as an evildoer and admitted to once being part of said evilness. This was a reference to the East India Company's involvement in the Atlantic slave trade.

Sir Stuart Strange presided over the meeting at East India Company House to discuss the legacy of not so much mourned Horace Delaney, a former member of the company. During the meeting, he asked Benjamin Wilton to brief the other members about the past of James Delaney, son and heir of the deceased. Then they discovered that James served as a cadet under the control of Strange himself years before. Several days later, Strange tried to convince Delaney to give up Nootka Sound, the plot of American land inherited. At the refusal of the young man, Sir Stuart Strange lost his temper, deliberately antagonizing young Delaney. [4]

The plans of Sir Strange to get rid of James Delaney continued to take shape when informed by Wilton about Delaney's new shipping company, Strange began to suspect that the Americans were hiding behind Delaney's recent fortunes. When a mysterious woman claimed to be the widow of the late Horace Delaney, Sir Stuart Strange decided to take the opportunity to steal Nootka Sound from James Delaney. [5]

Totally angry with his subordinates, Sir Strange came to terms with Solomon Coop, secretary of the Prince Regent, in a conversation with implicit veiled threats about the outcome of Nootka Sound, and their apparent common goal to get rid of James Delaney.[6]

When Sir Strange was informed by Wilton about Solomon Coop treason, who had tried to buy the favours of Lorna Bow only on behalf of the Crown, the head of the East India Company went on a rampage, venting his frustration on Benjamin Wilton and John Pettifer. [7]

Sir Stuart Strange convened an extraordinary meeting to deal with the recent robbery at their warehouses with stocks of gunpowder. Later, frightened by the recent affiliation between Solomon Coop and George Chichester, spokesman of the Sons of Africa, Sir Strange commissioned Wilton to destroy some documents about the slave ship and contacting Mr Chichester immediately to offer him their support, trying to deflect the blame for the sinking off the East India Company, and above all from himself.[8]

Sir Strange was briefed by Wilton and Pettifer about their conversation with Chichester, finding that the latter was really determined to carry out his royal commission to investigate the covered up affairs of the East India Company. After evaluating a strategy involving the King, Prince Regent, Delaney, and Chichester comparing them to pawns on a chessboard, Sir Strange decided it was time to implement their plan. Joyfully, Sir Strange gathered a council among the members of the Company's Desk, revealing how a priest had snitched about the confession of a certain Ibbotson, an associate of James Delaney, who had confessed to where to find the factory. Sir Strange then gave orders for a search, waiting anxiously the good news, but when Wilton returned to report that the factory had been dismantled before they arrived leaving them with absolutely nothing, Sir Strange ordered that Delaney's ship was destroyed as a declaration of war. [9]

A Deal with the Devil

Despite losing the battle, Sir Stuart found soon the will to win the war when two prostitutes, Helga von Hinten and Pearl, presented themselves before EIC's Desk, confessing to being aware of important details about Delaney's involvement with the theft of gunpowder from the warehouses of the East India Company. Sir Stuart, then, had them arrested for complicity, waiting that they could be used as witnesses during the trial. Since the American citizen who commissioned Delaney's gunpowder had tricked him into carrying out the King's murder, Strange and Coop denounces Delaney for high treason.

Along with his associates, and attorney Robert Thoyt, Sir Strange visited Solomon Coop, making him aware of the news and, thanks to legal loopholes, managed to secure Nootka Sound to the King. Sir Strange demanded exclusive trade with China. While playing golf, Strange was approached by Chichester, who was mistaken for a caddy by Strange because of his skin colour. Chichester informed the EIC chairman to have evidence that would prove his undoing, leaving Sir Strange disappointed because he thought he had won once and for all. Following his arrest, Delaney refused to cooperate and Sir Strange had to meet him in a cell as part of an agreement between Delaney and Coop. [10]

Sir Stuart was then blackmailed by James Delaney, who proved to have vital documents for the defeat of Sir Strange and his precious company. Sir Strange could not help but accept Delaney's requests and, once back in his office, he instructed Wilton to provide a ship and necessities to Delaney's affiliates. While waiting to be free from blackmail, Strange received a visit from an angry Chichester, and the two men implicitly proved to be both pawns in the hands of Delaney, writing false treaties between the Company and Delaney, for the Crown to try to issue a complaint against Delaney, but Coop got in the way with a cold-blooded execution of Delaney and his companions. Believing himself to be safe, Strange received a package signed by Dr. E. Dumbarton. Believing it was a treaty which gave him a monopoly on the tea trade with China together with the end of Delaney's situation, Sir Strange indeed met his end, since the package contained an explosive that was activated as soon as the man opened the casing.[11]

"The issue today is Old Man Delaney. May he rot in Hell!"
― Sir Stuart Strange about the late Horace Delaney

"Jesus Christ! Am I the only one in this company with a brain?"
― Sir Stuart Strange

"Delaney! He's turning London into his own private bear pit. And what are we? The bear? Or the dogs? Shit! And that fat pig-Prince Prinny plays the fool so he can better play the game. I'll pop him. I swear to God I'll burst him like a pig's bladder!"
— Sir Stuart Strange 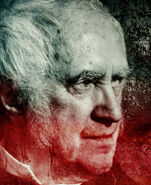