Private Secretary of the British Crown

Solomon Coop is the private secretary of the British Crown. Coop is a major character in the first season of Taboo. He is portrayed by Jason Watkins.

"Private Secretary to his Majesty King George, he is known as the whip and cane of the King. He has a network of spies who keep him very well informed, but working for The Prince Regent, has filled him with frustration and contempt." [1]

Solomon Coop is a shrewd and patriotic man of state affairs that cares a lot about the fate and prosperity of the British Empire even more than the Prince Regent himself that he uses as a pawn for his machinations. As enlightened as bloodthirsty, Solomon Coop is a corrupted politician who displayed an aggressive behaviour and he is far from a stranger to brutal violence, or other unethical means to achieve his aims. He has participated in clandestine and murky activities away from the British Constitution, for example, by torturing prisoners, which is something that had been prohibited for 100 years, or giving more power to the King. His crimes have never come to light, which has kept him in British state policy for a long time. His liberal ideology also had positive implications. He is an advocate for the anti-slavery movement and has conveniently agreed to George Chichester's inquiry request.

Solomon Coop is a middle-aged man, medium height, and stocky build. With fair complexion, he has a round face, small green eyes and reddish hair thinning on the head. He is an elegant man wearing refined and austere clothes, and always wearing the symbols of his rank in society pinned to the jacket, or worn as a necklace in the case of chains and red ribbons of chivalry.

Solomon Coop is a Machiavellian Private Secretary to His Majesty of doubtful legality, who during his career has created a dense network of spies that allow him to be always a step ahead of his opponents. During his career, he has got to come to terms with Sir Stuart Strange and the East India Company.

A Wolf at the Royal Palace

Solomon Coop was received by His Royal Highness in one of his parlours to discuss trade and navigation, but Coop was constantly interrupted by the Prince with his unnecessary statements about the ink used to mark the points on one of the maps. [2]

After informing the Prince Regent about the Nootka Sound issue, Solomon Coop paid a visit to Sir Stuart Strange to discuss how the Crown and the East India Company would have ended the matter. The two exchanged bitter words, very careful to veil their threats and insinuations behind a false courtesy. Coop was also very satisfied in informing Sir Strange to be always aware of everything due to the dense network of spies, much more extensive than that in the payroll of the Company. Later, Solomon Coop saw a play at the Theatre Royal, Drury Lane instructing the woman who offered actresses' sexual services for the spectators, to deliver a letter solely and exclusively to Lorna Bow, otherwise the penalty of death. [3]

Acting on behalf of the Crown alone, Solomon Coop tried to win Lorna Bow's alliance by offering her money and a social position in exchange for Nootka Treaty. Otherwise, he would have Lorna arrested for attempted murder. Solomon Coop eventually arrested the woman and ordered Low's bribed lawyer to leave for privacy. He then humiliated and threatened her by tearing her undergarments, insinuating an imminent sexual assault were it not for the sudden intervention of Mr. Benjamin Wilton, who entered the cell on behalf of the East India Company's interests. [4]

During a conversation with the Prince Regent, Solomon Coop suggested to investigate Sir Stuart Strange and the secret manoeuvres of the Honorable Company rather than seeking those responsible for the robbery of stocks of gunpowder. To counter Sir Strange, Solomon Coop received George Chichester, spokesman of the Sons of Africa, offering the man the opportunity to inquire about the wreck of a slave ship, whose shipwreck is imputed to the decisions of the East India Company. [5]

Reached at the Royal Palace by the major exponents of the East India Company Desk— namely Sir Strange, Mr. Benjamin Wilton and Mr. John Pettifer, along with attorney Robert Thoyt— Solomon Coop was cornered by them about the Nootka Sound issue, and soon forced to give in to their demands. Once James Delaney was arrested by King's guards with the accusation of betrayal of the Crown, Solomon Coop presided over the interrogation in one of the Tower of London's cells. The prison was exclusively for Delaney with the aim of circumventing the law and hiding the evidence of Coop's cruel acts. Coop ensured that Delaney was tortured in order to snatch from his mouth the names of the other traitors and, then, report the findings to the Prince Regent. Unable to extort a confession, Solomon Coop had to yield to James' request for a private meeting with Sir Strange in one of the cells. [6]

Presiding at the fraudulent trial of James Delaney, Coop threatened him again to obtain a confession. However, he wasn't able to bring him in front of a legal trial because Delaney could confess Coop's torture, and that would end his career. Solomon Coop used foul language and threats against Delaney in order to extort the names of his associates, but thanks to James' manipulation enacted during his secret meeting with Sir Stuart, Solomon Coop was compelled to acquit the man. Later, Solomon Coop tried in vain to restrain the Prince's desire for revenge against all those who dared to take action against him. Solomon Coop used the Prince's wishes to kill Delaney, in order to hunt him down and gain the full confidence of His Highness, causing British troops to commit murder, and thus make the Prince believe that he is eliminated by legal means, that is, the death penalty, and thus avoid a complaint from Delaney for torture. [7]

" Mr. Delaney, unless you give up the names of your co-conspirators every single stitch they have just put into your flesh I will pull out myself with my fingernails. Give us the names, or you will be racked! I will squash your balls myself and make you eat the paste. You promised to give me those names."
― Solomon Coop threatening James 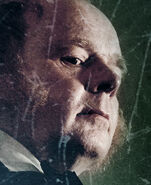