Jefferson Hall
Thorne Geary was the resentful and ambitious brother-in law of James Delaney. Geary was a major character in the first season of Taboo. He was portrayed by Jefferson Hall.

Thorne Geary was an austere man adamant in his conservative beliefs, including blatant racism. Thorne Geary was a covetous and arrogant bourgeois showing a cold and manipulative behaviour towards his wife. His ill-tempered jealousy towards Zilpha was his ultimate demise, as he tried to use her in his personal vendetta against his brother in law, James Delaney. As a wealthy member of the British society, Geary sought to move forward in the ranks and cumulate a huge sum of money after his father in law died. Quite possibly, the whole reason behind his marriage was monetary interest and lust. Thorne Geary's conservative ideologies also reflected in a distorted view of religion and spirituality, which included the implementation of an exorcism to subdue his wife.

Thorne Geary is an unscrupulous man, intending to inherit Delaney's fortune. At some point during the ten years that James was away from London, he married Zilpha. Since then, Thorne Geary has assiduously negotiated with a spokesman for the East India Company — possibly Robert Thoyt, Delaney's attorney — to sell Nootka Sound to the Company once obtained it from Horace Delaney's testamentary will, in exchange for a generous payment.

When James Delaney apparently returned from the dead, Thorne Geary's plans about his wife's inheritance suffer a drastic unwanted crease. Alarmed by the presence of his brother-in-law, and the intimacy that he seemed to have with Zilpha, Thorne decided to find a way to get rid of him, even plotting James' murder case had been made necessary. [2]

Upon learning of the absence of his wife from last will of Horace Delaney, Geary shouted that the legacy would have been James' death sentence, during a fit of rage at the lawyer's office. [3]

Thorne met James at the tavern, and the two had a bitter conversation about Zilpha. Thorne, with jealousy concealed by sarcasm, thanked James for making Zilpha an indomitable woman under the sheets. Back home, Thorne gave vent to his resentment back of his wife, accusing her of being faithless. He also accused his wife of being unable to get pregnant. [4]

The Geary spouses were invited to the soiree hosted by Countess Musgrove to her palace. As the party took a more party-fold Thorne, suffering from 'laughing gas' provided by George Cholmondeley, and fought with James Delaney, resulting in a challenge to a duel in front of all the guests. [5]

Early in the morning, Thorne reached the place chosen for the duel, covered by a fellow soldier. Thorne was decided by one battle to the death, but it was decided that the duel was to "first blood", complete with a doctor giving first aid to the injured man first. However, at the time of the decisive battle, Thorne's gun fired blanks, revealing that his subordinate had been paid by the Company in order not to kill James. Humiliated, Thorne returned home, venting his frustration on his wife. During the night, when he heard his wife whispering the name of James during sleep, Thorne beat her and then forced her to undergo an exorcism by a priest with dubious intentions. [6]

Completely drunk in broad daylight, Thorne Geary greeted rudely the visit of Lorna Bow, irritated that the woman had come to look for information on James Delaney in his own house. Later, excited for a letter informing him about important news from Australia, he tried to seek the sympathy of his wife with poor results. At night, asleep on the bed, Thorne was killed by his wife through a long needle inserted through the chest cavity. The corpse was then made to disappear by James, thanks to the help of Dr. Dumbarton who classified the death as due to cholera. Thorne Geary was then buried in the churchyard of his parish. [7]

"If he does not leave England, I will kill him."
― Thorne Geary's threat

"Why would I feel that way about him, after meeting him only once? The son of the same father as the woman I love. Why does a soldier know that a N— (sic) bowing low has a dagger in his shoe and is reaching for it? Delaney is nothing more than a N— now."
― Thorne Geary on James Delaney

"He should have stayed where he belongs, in the jungle. Dancing naked and screwing wild pigs, and his slaves in their chains."
― Geary talking about James to his wife

"Be sure of this, Delaney! That legacy is your death sentence!"
― Thorne Geary's threat 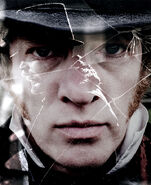 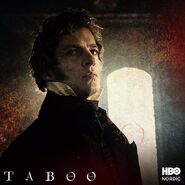